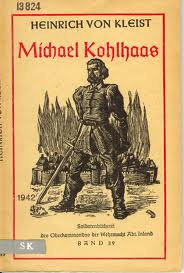 or A Tale From an Old Chronicle...

I sometimes pretend to my girlfriend that I envy her for not having read this or that. De bonne guerre, stupide but with a tiny ring of truth to it in that there are books that I wish I'd discover tomorrow morning on my non-way to non-work. I'm a good audience but I rarely get knocked out anymore, la tristesse ou le privilege de l'age. And this week, this damned cursed week which started by a close friend being torn out of our lives, ripped off at 25, well I found a book. A real one. One that would have shaken me but that, for these days, turned the storm around, a maelstrom that would have lost me but, then, stabilized me.

About the joy and shame of discovering Heinrich Von Kleist's Mikhael Kohlhaas at nearly 40 then...

I know Kafka talked about Mikhael Kohlhaas in one of two only public appearances. I understand why. He probably did it justice, I could not find a transcript of the talk anywhere. I may do not achieve that as my rain has seriously been blown way by those short 100 pages. Shall I wait and recompose. Nah, composing is for appointed critics, we are proud amateurs.

I will not tell you about the plot of M.K (basically revenge/justice) but how many things I love and was impressed to find in a 1808 German novella. Almost, The last place I'd have looked

I see so many ways to make it as a movie. But more. I see the Western reduced to its purest, an injustice to be repaired, a just man torn between violence and legality. I see the Roman Noir in the incredible behavioral writing of H.P. Von Kleist , as I see George McCready as the evil Squire (Que Garnier pensera de cela?).

I see the beauty of Guerilla and the scum/schemes of (court) power.
I see lengthy and hypnotic pages of german genaologo-geo-legalism that entranced me (!!!), the labyrinth of legality (where K got lost ?) and it's absurdity. I saw a German ding with a South American picaresque ring (what did Borges thought of this book? I'd pay to know), Bergman and Leone.

Susan Sontag, Rodrigo Fresan mention this absolute masterpiece in their papers. But this is not enough. This is should be compulsory reading.nI don't know, I may raise a few ruffians like Mikhael Koohlhass did, burn a few banks and castles, and force the word onto the people.
Or you can simply get it, it will end my dream of heroic death on the scaffold once and for all... I'll pay you back in despise if you do not like it.

[a quote is not a good way to testify of the immense quality of Mikhael Koohlhas. So For once I'll pass, scared to give you wwrong impression of a book that really lost me.]
---------

PS: Volker Schlondorff adapted it in 1969 (to be seen soon). HBO made a shit western out of it, Jack Bull and Bruno Ganz/madds mykkelsen will be in a 2012 adaptation by...Arnaud des Pallières (not the worst choice?). To be continued.

PS': This book got me in to German/Swiss 19th century dark (but not gothic) novellas. Soon coming: Theodor Storm's Der Schimmerlreiter and Jeremiah's gotthelf's Die schwarze Spinne. Funky is not the word.
Posted by xgatitox at 14:40